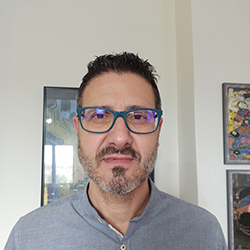 Charalambos Orfanoudakis has been a permanent teacher of Informatics in secondary education since 1997. He graduated from the Physics Department of the University of Patras and holds a Master of Science (M.Sc.) degree in Information Technology from the University of Nottingham in Great Britain.

He has worked in the private sector and has been involved in the development of telecommunications software.

In the field of Vocational Education and Training, he has been a certified adult educator since 1997. Since 1995, he has been teaching various IT subjects at Public Vocational Training Institutes (DIEK) in Athens and Patras. At the same time, he participates as an instructor and coordinator of IT programs in Lifelong Learning Centers in Athens and Western Greece.

Since 2012, he has been involved in the administration of education, where he served in the directorates of primary and secondary education of Etoloakarnania but also in the Public Vocational School of Nafpaktos, where he is director from 2016 until today.