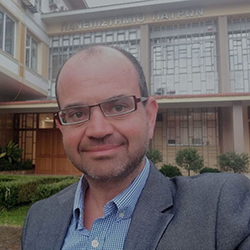 George Asimakopoulos was born in 1972 in the USA. He repatriated to Nafpaktos in 1982 with his parents.

Today he holds tenure as a lecturer at the Department of Electrical and Computer Engineering at the University of Peloponnese.

He studied Computer Science at the University of Crete. After finishing his military service in the Technical Corps, he worked in Athens at 01 INFORMATICS. There he met the world of Digital Society and Economy, first as an Information Systems Consultant and then as a Software Development Manager. At the same time, he completed his postgraduate studies at the School of Electrical Engineering and Computer Engineering of the National Technical University of Athens.

After completing his ‘internship’ in Athens, he chose to return to Nafpaktos in 2005. He collaborated with the Department of Telecommunication Systems and Networks based in Nafpaktos at the time, where he was unanimously elected in 2011. Besides participating in research projects, publishing conference papers and co-writing three books, George appreciates the fact that his work grants him the pleasure of watching young students transform into young scientists and professionals.

His research and scientific interests focus on the areas of digital transformation and digital society and economy.